Sometime in the wee hours of June 4, 1994, following yet another local comic jam at Gallery Stornaway, I stepped outside into the streets of downtown Montreal and began my long night-bus commute home to the west island. It had been an unusually successful evening. I’d finished one entire page of comic art, contributed to a handful of others, sold some minicomics for quick cash, and scored some girl’s phone number. Not bad, considering I nearly didn’t go.

I’d been to many comic jams before, but no one had officially invited me to this one that Friday evening. Nevertheless, I read I would be in attendance in one of the free weekly papers, so my reaction was to shrug and conclude, “I guess I’m going.” The jam was only a few hours away. Luckily, I was already in the city. 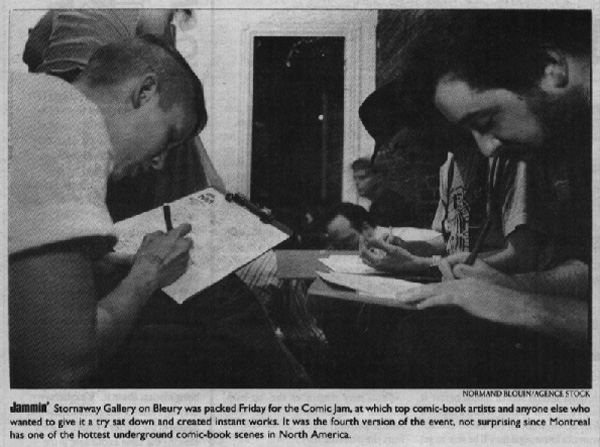 My solo page that night concerned one of my favourite topics: dead celebrities. Kurt Cobain had blown his head off only a couple of months earlier, so I thought it would be funny to pair him with fellow self-inflicted head-wound celebrity, Del Shannon, who had committed suicide in similar fashion in 1990. Was this in questionable taste? Of course. But it’s never “too soon” in gallows-humour land. The final panel referred to the deaths of Jimi Hendrix, from choking on his own vomit during a drug overdose, and Mama Cass, from choking on a ham sandwich (actually a long-standing urban myth, she died of a heart attack).

It was while I was inking this affront to both music and basic human empathy that I encountered a fan of my work. I let her see the page-in-progress. She didn’t know who Del Shannon was, but I took her phone number when she offered it anyway.

Five years to the day later, I married her.

Comic book artists don’t get nearly as many groupies as musicians, so we have to make them count.

2 thoughts on “Twenty Years Ago Tonight”