Film and Television, History and Archaeology, Sex and Perversion

Cinema History Bursts Onto The Scene (And All Over Your Face)

I’ve been having meetings about one of my feature-length scripts again. It’s one that’s peppered with film references. Normally I hate when movies do that, but this particular script is about a trio of film geeks, so it’s kind of hard to avoid the shop talk. I figure if I’m obliged to include self-referential movie-buff jargon, I’m going to make it as obscure as humanly possible. There’s nothing worse than when a movie has its characters talk about film and all they can reference is fucking Star Wars.

One bit of dialogue in my script dredges up the memory of Soviet propagandist Sergei Eistenstein and his communist-cheerleading feature, The General Line AKA The Old and the New from 1929. In one particularly inspiring moment, Russian peasants are introduced to the wonders of the modern world as an industrial creamer accomplishes, in short order, what used to take them hours of backbreaking labour. It’s a glorious moment, and they all beam in delight, confident that the revolution marches on and will deliver all sorts of efficiency miracles in the years to come. Surely if mother Russian can produce this much cream this quickly, communism will prevail in the international struggle of ideologies and all will be well in the world. Oh, and they’re also really happy because they’ve just invented the cumshot.

Or so my lead character postulates in his interpretation of the scene that just happens to mirror my own. Sergei Eistenstein films are somewhat unwatchable by today’s standards. Barring the battle in Alexander Nevsky, or the uber-famous Odessa Steps sequence from The Battleship Potemkin, Eistenstein’s work has become an historical footnote from a failed political system. It’s old, it’s dusty, and it’s every bit as heavy-handed as the communist ideals it so loudly (in a silent-film sort of way) endorses. Nevertheless, his contribution to cinema was enormous. Just like some of the other early film pioneers who made movies in support of some really reprehensible ideas (D.W. Griffith, Leni Riefenstahl), he somehow managed to help create the basic vocabulary of film despite being on the wrong side of the social-engineering fence. Much of what he and a select few of his contemporaries invented in their movies is part of what we now consider basic elements of how to tell a story with moving pictures. Someone had to come up with these shots, these compositions, these cuts we all take for granted now. Eisenstein was one of the first great director innovators and his contribution to film as an art form cannot be underestimated. 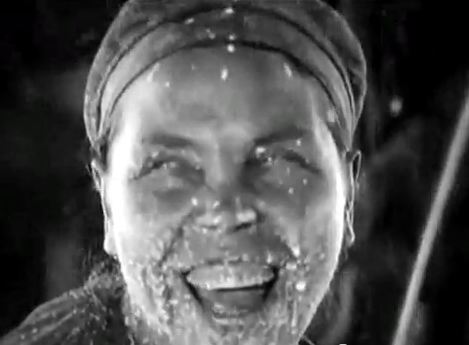 Marfa Lapkina takes it like a trooper in her one and only screen role.

I wanted to show this clip to our gathering of actors and producers so they could understand what I was on about, but it took a bit more digging back home for me to find the scene in question. The General Line is not terribly well-known or regarded these days, and my usual movie-geek bit-torrent sources came up empty. It figures Youtube would have the right clip. They have pretty much anything that copyright lawyers can’t squeeze a buck out of. Now, at last, the cast and crew can see it for themselves. And they’ll know I’m not crazy in the head. I just have a dirty mind.