History and Archaeology, Politics and Sociology

Even as the whole world celebrates the inauguration of Barack Obama, my thoughts can’t help but drift to the ever-tenuous reputation of George Bush. As he slithers out the back door of the White House, leaving behind two wars, a ruined economy, destroyed foreign relations, and a viscous trail of slime, I can’t help but feel a little bad. As historians debate what his final legacy may be, hyperbolic insults continue to be uttered and may grow deafening again as the title “Worst President in History” solidifies. Much as he may have all this and more coming, can we, at the very least, finally put the Hitler comparisons to rest? I mean, really, it’s rude, it’s insulting and it’s demeaning. 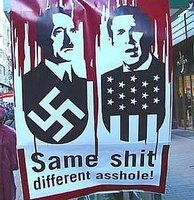 Old Adolf is already history’s greatest boogieman. Do we really have to subject him to the final insult of comparing him to George W. Bush? Give the poor genocidal maniac a break. Sure, they’re both war criminals responsible for brutality and torture on a massive scale. But Adolf Hitler was a competent war criminal. Bush, on the other hand, has gone about his crimes against humanity in bumbling-boob fashion. Mean-spirited comparisons between him and the legendary Nazi dictator do serious damage to the memory of Hitler, and tarnish his otherwise impeccable reputation as the most despised monster of the last thousand years.

Now, I know, Hitler made his fair share of boneheaded mistakes. In retrospect, declaring war on America following the bombing of Pearl Harbor wasn’t the smartest move. Nor was ignoring Napoleonic history and pressing his invasion of Russia well into the winter months. And really, what was up with that moustache? Bad bad choices all. But he never stooped to the astonishing level of slack-jawed idiocy of Bush. Hitler’s speeches may have been loud, frantic, even hysterical. But the words all made sense. Not necessarily in their philosophical content, but at least in the logical progression of one word following the next and forming correct sentence structure. Hitler’s policies may have been insanely xenophobic and dire in their consequences, but they didn’t work completely counter to his own stated objectives. It took invading armies to bring his country to ruin, not greed-fuelled economic models. And Hitler, to the very best of my knowledge, never nearly choked himself to death on a pretzel. Nor on any other Bavarian snack food for that matter.

So please, for the sake of correct historical context, try to refrain from the cheap and easy sport of comparing George Bush to Adolf Hitler. He’s more of a retarded, lobotomized genetic hybrid of Rudolph Hess and the monkey from Outbreak.

One thought on “Legacy”