Film and Television, Politics and Sociology

Work is wrapping up on my latest two cartoon shows, Kid vs. Kat and Racer Dogs, and I’ve noticed a trend. Since my days of writing very adult material concerning a bunch of Irish mobsters doing a lot of killing and screwing, the target demographic of my subsequent shows has gotten young and younger. This may be a natural byproduct of writing a lot of animation, but it seems my scripts are getting increasingly infantile. And I don’t just mean in the potty humour department. Whereas Kid vs. Kat was geared primarily for kids, Racer Dogs is aimed at even younger children. Now I have my agent running around trying to get me work on a new show designed for pre-schoolers. If I get that gig, I expect my following project will have me writing for third trimester fetuses. After that, I was thinking about jerking off into a cup and focus grouping my sperm.

Much as I like warping the minds of future generations with subversive subtext layered into my episodes, I really need to write some new material for actual grownups. Or at least people who know their ABCs and don’t wear jammies with stocking feet to their 8:00 pm bedtime. The problem with writing for children’s television is that it doesn’t help you improve your craft. In fact, it does damage to it. There are some excellent examples of brilliant storytelling aimed at children out there. None of them are on TV though. The television industry is already full of suits whose job is to cock-block quality from getting on the airwaves. When it comes to kids shows, the problem is further compounded by the standards-and-practices directives designed to protect children from anything that might upset, confuse, inspire, challenge or endanger them. Broadcasters live in terror that something they air may encourage some kid somewhere to do something that might cause some harm — thus inviting a big fat lawsuit. Therefore, children’s shows are increasingly designed to be the entertainment equivalent of a padded cell. No sharp edges for the kiddies — they might put an eye out on the wrong idea.

As a writer, this means I’m often asked to cut things from my scripts like conflict, irony or, indeed, proper narrative. And, obviously, any props that might cause physical damage to a child have to go. Sticks and stones and nasty sharp objects are the sort of things that usually get targeted by broadcaster notes. But all too often they’ll let their meagre imaginations run wild and come up some truly paranoid ideas about what might maim or kill one of the kids watching out there in TV-land. On past occasions, I’ve been told to remove such innocuous items as (I shit you not) sleeping bags, tiddlywinks, and ice cream.

As far as I’m concerned, if some kid gets a stupid idea in his head because he watched a TV show and then goes out and gets himself killed, that’s just Darwinism, pure and simple. Clearly, they were peeing in the shallow end of our gene pool, and they’re much better off being naturally selected to vacate the general swimming area. Hell, I grew up watching the Looney Tunes shotgunning each other in the face, and I always knew better than to play with guns. Or anvils or dynamite or rocket-skates for that matter. What sort of morons are we raising if we can’t trust them to base their understanding of reality on something more practical than a goddamn cartoon?

No, I never went out and harmed myself or others based on what I saw on one of the many ultra-violent kids shows of my youth. The one that fucked me up was The Friendly Giant — surely among the most tender, inoffensive, sweet-hearted children’s programs ever devised by man. Nevertheless, I let it inspire me to do something truly stupid. It was thanks to one episode when Jerome the giraffe mentioned a skiing accident he once had. Never mind what a giraffe was doing on skis. For whatever reason, I got it into my head that having a skiing accident would be a really interesting experience. Perhaps I’d have known better if Sonny Bono had already put his head through a tree on a Lake Tahoe ski slope, but back then he was still singing “I Got You Babe” with Cher. 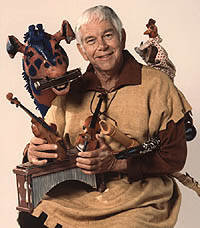 I didn’t ski, but I did go tobogganing regularly. So on one of my next runs down a local snowy hill, I purposely threw myself off my red plastic sled and wiped out hard. And it bloody hurt. The thing is, I didn’t go blaming The Friendly Giant, or Jerome, or that creepy rooster-in-a-bag, Rusty. I blamed myself for being such a moron that I let a dumb TV show inspire me to do anything more dangerous than change the channel. I learned, I moved forward, my DNA remained viable. That’s how it should work.

These days, however, we’re so determined to keep all the stupid little kids alive, we’ll hamstring anything that might be entertaining to the smart ones. What’s more, we can’t even come clean and tell the slow ones that they’re stupid because it might hurt their precious feelings. I once had a producer come to me and tell me I could never have my characters call each other names like “moron” or “idiot” because these were actual scientifically defined terms based on I.Q. tests, and it might prove offensive to viewers.

“It’s not like they’re going to write in and complain,” I protested. “They’re idiots!”

“No, they won’t write” said the producer, shaking his head sadly, “Their parents will.”

It always comes down to the parents. They’re so determined to childproof the world, they’re hell-bent to fuck it up for the rest of us. The dumbasses survive childhood only to have more dumb children of their own. That’s how we end up with a world that has warning labels on coffee cautioning that it’s hot, or instructions on industrial high-pressure air hoses that tell us, “Do not insert in anus.” Really. Those are out there.

Well I say it’s up to the parents to protect their own children. They’re the ones who need to communicate to their kids that the world is full of hard, pointy, dangerous things. Things that will maim them, or poison them, or kill them, or hurt their delicate feelings. It’s up to moms and dads to pass down basic survival skills to their offspring. It shouldn’t fall on kiddie shows to pretend nothing in this world can possibly hurt them. Most kids will get it, understand, and thrive.

As for the others… Maybe, in the better interests of the species, responsible parents can take a less-evolved cue from the animal kingdom and eat their young.