The Transportation Hub Of The Universe

On my recent trip to Vancouver, I also took the time to infiltrate Bridge Studios for various business and stalker-related purposes. Bridge Studios is home to three ongoing projects of paramount importance to world pop culture. Both Stargates, SG1 and Atlantis, shoot there. And although I’ve never seen a complete episode of either, that didn’t stop me from taking an extended tour of the set during everybody’s lunch hour. I snapped off a bunch of behind-the-scenes photos of anything and everything that struck my fancy.

“They let you do that?” I was later asked.

No. But no one was there to stop me. And in the end, isn’t that what’s really important in life?

Fun fact: Bridge Studios is thusly named because it used to be owned and operated by Dominion Bridge, Canada’s predominant bridge-building company originally founded in my home town of Lachine, Quebec.

For all you Stargate fans, I’ll just say: yes. Of course I crossed through both stargates. And they really do work. However it seems at the time of my visit they were both configured to send travelers to Burnaby B.C., so my tour of the known universe was somewhat limited.

The third pop-culture event Bridge Studios houses is the meteoric career of Uwe Boll. Celebrated far and wide as the worst filmmaker working today, he shoots all his videogame-based box-office atrocities on the premises. Right now, he’s working on Postal, which promises to be an even bigger shitstorm than previous outings like House of the Dead, Alone in the Dark, and BloodRayne.

Fun fact: The original Lachine branch of Dominion Bridge operated for many decades and, aside from constructing many famous spans, worked my grandfather to death in 1942.

Some years ago, my name was bandied about as a writer who might be able to do a quickie post-production rewrite on Alone in the Dark to help it make sense…any sense at all. It never happened and the film went out as-is, disappointing video game fans far and wide and helping bury Christian Slater’s career once and for all. A special supplemental movie-night screening of Alone in the Dark was arranged at Eric’s one evening, and I was astounded to see the relatively short running time of 96 minutes put the entire room to sleep before the first hour was up. I’m not claiming any sort of voice-over exposition I might have been able to provide could have saved the movie. But perhaps, just perhaps, it might have made audiences ask “What’s going on?” one or two times less.

I was hoping to run into “Dr. Boll” on the studio lot or at the nearby production offices so I could rub shoulders with film history, but he wasn’t around that day. He was probably down at the gym training hard for his Uwe Boll versus His Critics promotional boxing match that was scheduled for a future date. That future date has come and gone, and you can watch former semi-pro boxer Uwe kick the crap out of several rank amateur, out-of-shape internet hacks on Youtube. There’s also an interesting account of the wondrous experience that was getting the crap kicked out of you by Ed Wood Jr.‘s heir apparent on Ain’t-It-Cool-News (scroll down the talkback to “Lowtax’s comments on fight.”) Don’t worry, Uwe didn’t beat up Harry. It was some other internet hack who took the thrashing.

My disappointment in failing to meet Herr Boll was alleviated only a day later when, to my delight, I watched him mount the stage at the Elan Awards to present one of the categories. I didn’t hear much of what he had to say. My table was too busy making sarcastic remarks about all the presenters to listen. But I did note that he took pains to plug the hell out of his boxing match before reading off the nominees.

You go Uwe! If more filmmakers out there admitted their whole career was a bad joke it would be a better industry all around. 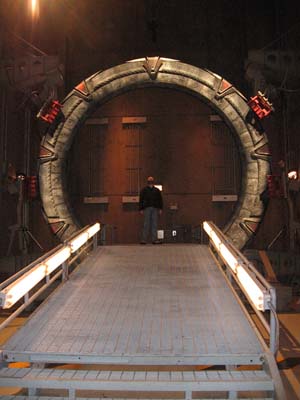 Damn, still stuck in this galaxy.

If you watch the show, you’ve seen this generic village set redressed a thousand times and shot from every conceivable angle. 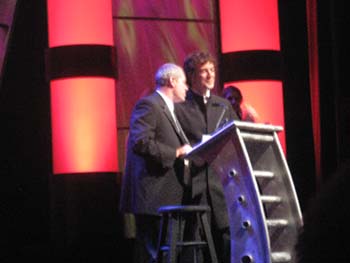 Uwe (left) presents some video game category or other at the Elans. No, he didn’t exchange fisticuffs with his co-presenter.