Film and Television, Music and Song

Lock Up Your Daughters

As if Pucca weren’t enough of a phenomenon already, she’s now in the process of invading Europe faster than Hitler on amphetamines. The original flash animation shorts have been available online for years now, but the new episodes we’ve been producing for Jetix are starting to crop up on Youtube. The first cartoons I caught were in Dutch, but I guess it’s now airing in the U.K. because the latest ones to appear have all been in English. Among them is my Elan-nominated Treasure of the Comfy Sofa, making it only the second episode of something I wrote deemed worthy of piracy on the web (the zombie-nerd episode of Fries With That? popped my cherry two years ago).

This also marks the first time something I wrote has been censored by a broadcaster. A two-second nunchuck-to-the-head gag was snipped out, which is perfectly reasonable. In a cartoon series that encourages little pre-pubescent girls to be sexually aggressive and kick the shit out of anyone who gets in their way, the last thing you want to do is depict someone getting hit in the head in a slightly different fashion than all the other characters who get knocked in the head five thousand times per episode.

I’m hoping that sometime in the future we can look forward to a special-uncut-unrated-director’s-extreme-restored-version-you’ve-never-seen-edition of Pucca on DVD that will feature all available footage and help warp your children even faster.

Other clips from the new Pucca TV series have also slipped out, including the Jetix promo that’s currently on their top page, and this cool demo reel from Tony Cliff who worked on a couple of my episodes as animation supervisor. The infectious theme song is also worming its way into popular culture, and although some bands have expressed interest in covering it, the only covers I’ve seen so far are the kind that will get you beaten up by your classmates Monday morning at school.

For those of you who want to sing along, the lyrics to Plus-Tech Squeeze Box‘s insidious tune are:

Cole Porter would be proud. 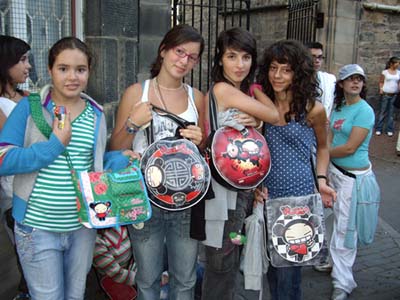 2 thoughts on “Lock Up Your Daughters”