X-number of millions of words later, it was time to retire my old faithful Dell keyboard.

Ten years is the longest time I’ve gone between major computer upgrades. Back in 2010, my old computer was a revelation. It flew on Windows 7, and offered me more computing power than I ever could have imagined possible back when I got my first real (as in non-Commodore 64) computer. That original one was an IBM compatible 286, and it was magic, with an internal hard drive sporting a massive storage capacity of 40 megs. I could barely comprehend how powerful it was. Now it seems like an abacus, but I hope it’s doing well in whatever landfill it currently occupies.

My more recent computer remains next to my desk, and is likely to remain there for quite some time as I continue to refer back to it. It’s still a workhorse by modern standards, but computers get finicky and clunky in their old age, and ten years is a long time in computing.

So long, in fact, that the lone part I hadn’t planned on upgrading turned out to be pretty badly obsolete.

The relationship between a writer and his keyboard is intense. I’d actually carried my old Dell keyboard forward from two computers ago. I hadn’t liked the free-with-every-purchase keyboard that got tossed in with the previous rig, so I just kept using the earlier freebie. It was cheap, but I liked the feel of it. The keys didn’t click, but they weren’t soft either.

I wrote many books, short stories, screenplays, teleplays, and graphic novels on that thing. Many millions of words, probably billions of keystrokes.

But now, even with an adapter to plug it into a USB port, the brand-new computer would reject it after a few minutes of use. Before long, I’d be forced to resume typing on a wireless I picked up as a stopgap at Bureau en Gros. It was okay, but I wasn’t wild about it. Some of the key placements were odd, some extended characters were mislabelled, and it only revealed itself to be a French keyboard once it was out of the box.

It was finally time to shop for a real keyboard. Something higher end, more befitting of a career writer who’s been at it for over thirty years. 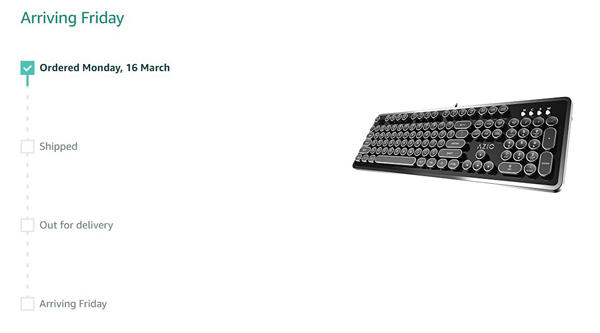 The AZiO isn’t clicky. It’s clacky. And therein lies a world of difference.

I grew up hammering away on keyboards. It started with too many years of piano lessons I hated, and shifted to typewriters I liked much better. I learned to type and write on mechanical typewriters. Usually old Underwoods and Coronas fished out the trash in the 1970s, or bought for a few bucks at garage sales. I wish I still had them, because they’re expensive antiques now. At the time, though, they were considered disposable junk that could safely be tossed to a child to bang away on while he played a game of pretend-author.

Real effort had to be expended to make each keystroke successfully strike the page. And those dinosaurs clacked hard. They clacked with each letter, clunked with every platen advance, dinged near the end of the right-hand margin, and ka-chunked with the carriage returns that recoiled like an artillery gun lobbing an explosive shell a mile across the Western Front.

Eventually I moved on to electric typewriters, and finally computer keyboards, but I never lost my nostalgia for those little round keys that went CLACK CLACK CLACK.

The AZiO is one of several keyboards on the market that scratches that itch. It even clacks loud enough to be heard right through my noise-cancelling headphones. This, believe it or not, is a desirable feature.

So far I’ve written about 100K words on it. It seems to be a well-built piece of equipment. We’ll see if it’s durable enough to survive the same number of millions of words the old Dell disposable managed. Or if the constant friction will eventually cause it to burst into flames when I’m at my most inspired.