Barring any late-stage hiccups, the entire Longshot Comics trilogy will be available to order through Amazon next week.

I thought I’d take these closing days to look back at the history of the Gethers saga, and the process of dragging the (mostly) Victorian and Edwardian shenanigans into the 21st century.

And what a process it was. Over 11,000 panels later, I have to admit it was more work than I could have possibly imagined. Despite worming my way through this routine before, the technology involved has changed enormously over the last 25 years, and everything was new and unfamiliar again. With improved tech comes higher expectations, and there were times when it was touch and go whether I could force various platforms and pieces of software to perform the way I needed them to perform in order to do these latest greatest editions justice. Compatibility issues, glitches, and bugs conspired to set fire to all the hoops I had to jump through. Let me take this opportunity to extend a special “fuck you” to the fine folks at Microsoft and Adobe in particular. Next time you need someone to stress test your shoddy coding or gouging business practices, put me on the payroll. I’m sure I can supply you with some handy, enlightening notes.

At this 11th hour, it’s now Kindle Comic Creator’s turn to tweak my balls for sport. This time last year I was still looking into the possibility of taking the project to an outside publisher rather than doing it all myself like it was 1993 all over again. One of the deal breakers was that my preferred publishers don’t do ebooks. That’s an essential market for me. Most of my sales come through Kindle copies of my books, or page reads from Kindle Unlimited subscribers. Although I do recommend Longshot fans opt for paperbacks when the day comes, I wanted a quality ebook option to exist. Thus Kindle Comic Creator. It’s a decent enough piece of software, but not without its quirks. Like its habit of arbitrarily closing on me for no other reason than I had the audacity to move a page. I think it does it for shits and giggles. There’s some AI algo out there that’s having a laugh every time it gets to inconvenience me for another 30 seconds. Well laugh it up, asshole. We only have to do this dance for a few more hours. 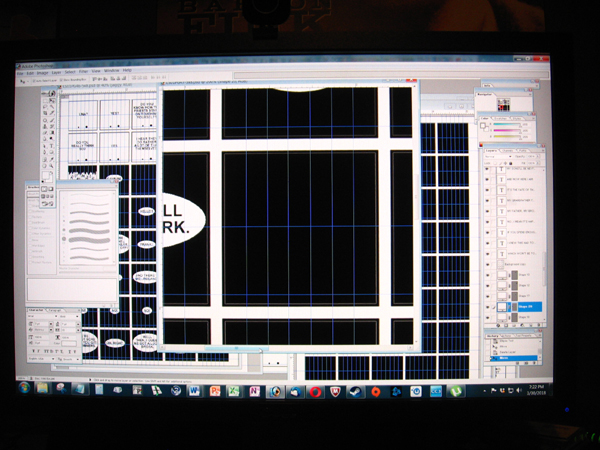 Longshot Comics goes dark for one of the mining sequences.

Roland utters his last line of dialogue in The Failed Promise of Bradley Gethers.

If you’re chomping at the bit for Longshot material, or if you just want to help support my efforts here at Eyestrain Productions, I now have a Patreon page. Patrons at various levels will get access to exclusive material, including new and expanded versions of the old Longshot short stories, some of which are spectacularly rare. For instance, were you one of the handful of people who bought the Longshot Comics t-shirt that featured an original 120-panel tale on the front and back, circa 1997? I bet you weren’t. But that’s the sort of fun stuff that’s going to be cropping up on the Patreon page in the coming days and weeks. Back me at the Collector tier and you can even receive signed paperbacks of the whole trilogy for less than you’d pay on Amazon—not to mention other upcoming novels I’m eager to get back to work on.