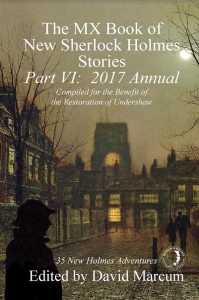 “The Adventure of the Cat’s Claws,” my latest Sherlockian mystery, has been published in The MX Book of New Sherlock Holmes Stories Part VI: 2017 Annual. It’s now available on Amazon for Kindle, with hardcover and paperback editions coming next Tuesday. This is the biggest collection in the series yet, brimming with new tales of Holmes, Watson, and other famed and infamous associates. Once again, I write from the point of view of Baker Street Irregular, Wiggins, as he reveals the tawdry truth behind “The Veiled Lodger”—one of the final stories of the original Conan Doyle canon.

With the seal of approval from the Conan Doyle estate, all proceeds will go towards the restoration of Undershaw, for the benefit of the Stepping Stones school that is now set up in the grand house that was home to Sir Arthur back when he was writing such famed tales as The Hound of the Baskervilles. As revealed in “The Veiling Lodger” and “The Cat’s Claws,” Holmes didn’t face off against gigantic dogs alone—there was at least one gigantic cat in the mix.

Followers of The MX Books of New Sherlock Holmes Stories will be dropping by the blog for a visit, so let me take a moment to offer them a handy checklist of my other mystery and crime books for sale through Amazon, and available to read for free for Kindle Unlimited subscribers.

Necropolis is a supernatural thriller full of intrigue, murder mysteries, and comedy for those who like their detective stories to come with a touch of magic and horror. 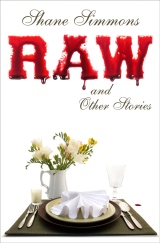 Raw and Other Stories features twenty tales of crimes, major and minor, petty and vindictive. It’s a single-author collection that prints many of my shorts that have previously been published in anthologies and magazines, as well as new material appearing for the first time.

Sex Tape is a soft-boiled detective thriller about the sleazy side of Hollywood, and the underbelly of the Montreal skin-flick industry. Join ex-paparazzo Sid Volke and publicist Alexandra Middleton as they race against time to solve a murder and keep a stolen celebrity sex tape from going public over the Christmas holidays. 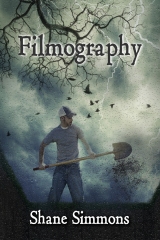 Filmography tells the story of three obsessive film fans who decide to make one final motion picture feature with their favourite deceased horror-movie star by kidnapping his corpse and putting him in front of the camera again. Extortion plots and international felonies snowball out of control, until everyone is in danger of ending up just as dead as their headlining thespian.

My thanks go out to all the newcomers making this visit. I hope you enjoy the new Holmes story and that you’ll want to read more material in my solo books. If you like what you see, stick around, follow the blog and/or subscribe to the newsletter.