There’s less than a week to go before the final nominees for the Bram Stoker Awards are announced and I find out if “Raw”—currently on the preliminary ballot—made the final cut. And also whether I’m going to have to drag my ass out to Los Angeles for the first time in years to attend the ceremony.

The Table of Contents for Raw and Other Stories can be viewed in the Amazon preview page, but I thought I’d go over the twenty stories in more detail here—and include links to where you can read some of them for free right now.

The closest I’ve come to writing a genuinely cozy crime story, I was fond enough of this tale to start off the entire collection with it. Fond enough, in fact, to withdraw it from submission somewhere else in order to include it here. Pity it didn’t get more of a kick at the can in the open market. I’m sure I might have placed it in some anthology, but one high-profile magazine decided to sit on it for an insane 341 days before getting back to me. Fresh off the keyboard and lost in limbo for nearly a year, it got pressed into service here to bookend the collection between something fairly light, and the extreme darkness of the titular story. If you click on the “Look inside” feature on the store page, you’ll get enough of a preview of the book to be able to read the entire thing.

Based on a real girl who actually did this job for a university one summer, this story was first printed in Betty Fedora Issue Two. Being the lead, you can again check out the “Look inside” feature on the page to get a preview—but you’ll get cut short about halfway through.

Originally slated for the Weird War anthology, it became homeless once that book was cancelled without notice at the 11th hour. A satire about war propaganda, it was hard to place again, but eventually found a home in Illuminati at My Door, where it was expanded by about 300 words.

The Last Seven Miles and Home

A quick little horror/crime jaunt I came up with for the Bumps in the Road anthology, it was chosen to lead off the book. Yet again, the “Look inside” on the Amazon page will give you a look-see—enough to read the whole thing. At this point, with so many free previews, you might be wondering why you would even bother by buy my collection at all. Hint: it’s only a buck right now.

It’s the Thought That Counts

This is one of my all-time favourites. Cruel, funny, and dark. It came close to selling a number of times, and then spent a year earmarked to appear in an anthology alongside such luminaries as Margaret Atwood. Yes, Margaret Fucking Atwood. And then the whole book got cancelled for reasons that remain shrouded in mystery. It was time to give up and include it in this collection because readers who follow my work should really have access to this one.

Just One of the Lads

One of the oldest stories in the book, this dates back to a time when I was finding my legs as a writer, before the film business swept me off my feet and plugged me into the screenwriting mill for twenty years. There’s a number of pieces I wrote back then that will never see the light of day. Most, like this one, were never even submitted anywhere, but made the cut as one of the few oldies worth collecting.

A piece of flash fiction I quite enjoy. This one was too dark for some of my usual outlets, but Out of the Gutter Online snatched it up immediately once they had a look. It can still be read on their site. I got the idea while I was sitting in a Toronto production company, waiting to have a meeting about yet another kiddie cartoon. They had a number of books in the waiting area lying on the coffee table, including a rare edition about Russian Mafia tattoos. It was a weird thing to find in a place that worked exclusively in children’s animation.

Anatomy of a Riot

I wrote this one for a very specifically themed anthology. It was perfect for them, exactly what they were looking for. And then they turned it down. I was left with a strange, morbid, docudrama period-piece that was an unlikely fit anywhere else. Indeed, my sporadic attempts to place it elsewhere proved futile, but I remain pleased enough with the results to include it here.

Another one of my favourites, it took me years to finally finish it, followed by more years of shopping it around. It became my all-time most rejected story, to the point that it became a running joke. Odd, because it’s among my very best short stories, provided your sensibilities are really troublingly dark. Last year, largely as a lark, I published it as a standalone story to take advantage of a Halloween-themed promotion. It immediately became my most downloaded and highest rated book to date.

The first of three pieces of criminal flash fiction I published with Shotgun Honey, you can still read it on their site.

“Foul” is how one friend recently describe this story. Then he went on to tell me how he delighted in relaying its odious contents to his wife. This is another oldie I sat on for many years without submitting anywhere. My initial readers were so appalled a quarter of a century ago, I decided to bury it. I only dug it out of mothballs last year when I placed it with Morpheus Tales for their Taboo Special Issue. Now it has returned to sicken and horrify again.

Piece number two with Shotgun Honey remains on their site. This bit of polite violence is possibly my favourite of the flashes.

Originally appearing in New Canadian Noir, I later published this as a standalone once the rights reverted to me. Call it a director’s cut of the story. Like “Hot Pennies” before it, this one also has some basis in my happy but sinister childhood memories.

This short piece hints at a larger story, then purposely refuses to give it to you. I considered it a thematic choice, but it frustrated editors. It will probably irritate you too.

This one barely got sent out before I stuck it in here. It’s an extreme (but consensual) piece of horror about ASMR culture, and I didn’t feel like waiting around for the next rare anthology into this sort of material to crop up.

From Locked and Loaded: Both Barrels Vol. 3 comes this crime story within a crime story. One reviewer called it “Hitchcockian,” but Hitchcock tended to make stories about a better class of criminal than these scumbags.

It’s All on You

Recently published by Out of the Gutter Online, it came out within 24 hours of the collection.

Likely the most autobiographical story I’ll ever write, it’s still a grotesque distortion of real life. It might give you some idea of what it’s like working in the screenwriting trenches. This isn’t a transcript of any meetings I’ve ever had, but some have come damn close.

Another recent crime story. Reading it back-to-back with the climactic tale, you’ll see some hints that many of these stories may be taking place in some shared criminal universe. This will come up again in future work.

And finally, the biggest bad boy of the group. Originally appearing in Silent Screams, now in line for a Bram Stoker Award nomination, this is a crime story that crosses the line into horror, and then likely crosses another line into what’s often labelled “extreme horror”—whatever that means. Uncompromising, no-shit horror, I guess. It remains the only story I’ve ever written with material disturbing enough that my wife had to skip parts when she was proofreading it. I had to point to a spot on the printed page where it would be safe to resume, but really, it only gets nastier.

Raw and Other Stories remains priced at $0.99 until the nominations, and can also be borrowed and read for free by Kindle Unlimited subscribers. 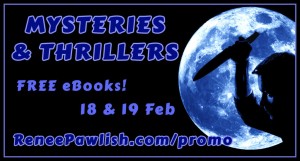 After a brief intermission being a pay book, Filmography has dropped down to freebie status again for the second promotion of the week. I expect most people reading this have long-since grabbed their own copy, but check out the rest of the Mystery and Thriller Book Promotion for more genre eBooks that are free this weekend.