There was a slight delay, but Locked and Loaded: Both Barrels Vol. 3 was released last week and is now available in physical and eBook forms. I haven’t received my pulp copies yet, but this new scan reveals the back cover for the first time and something I always like to see – a negative review.

“Nightmares written from the ghetto of life,” denounces the one-star Amazon review for the previous volume of the series. 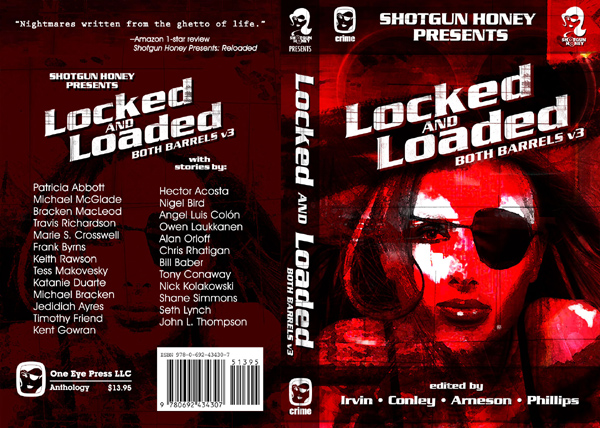 I looked it up, and this particular review (the only negative one for the book, in fact) came from one Betty Jonas, currently ranked number 30,511,827 on Amazon’s top reviewer list with only three reviews to her name. So, yeah, not exactly Roger Ebert. Checking out her other opinions, I was greatly amused by her summary of The Busy Writer’s Tips on Writing Mystery and Crime, which suggested, “You never know, you, or even I, might be the next Mike Hammer.” Classic, considering Mike Hammer is a fictional character. Mickey Spillane was the actual writer who created him.

Ron, the editor, expressed his sincere hope that the current volume will inspire similarly negative reviews. And I can see his point. Why print glowing reviews when the negative ones make a book sound so much more intriguing?

Why yes, as a matter of fact, I would like to read some nightmares from the ghetto of life. I would like to hang out with one despicable character after another. And if I’m going to read trash, it might as well be pure trash. Thanks for that glowing recommendation.

Order your copy today and give Betty a hug for me.