Death and Morbidity, Film and Television

How I Earned My Summer Vacation

I get asked what I’m working on. Often. It’s something I don’t like to talk about because usually I’m so excited by a project, I don’t want to curse it by speaking about it out loud. That or I’m so deathly bored by it, I can’t even muster enough energy to describe my crushing sense of apathy. After my last long, grueling contract early this year, I gave myself time off for good behaviour and have been wallowing in a strict regimen of movies and video games.

Which isn’t to say I’ve been completely idle. I managed to option off a couple of screenplays, albeit for a token-dollar fee to friends. That means all I need to do is option off the rest of my 99,998 feature-length screenplays on similar terms and it’ll have been a pretty successful year for Eyestrain Productions. I’m sure I have another 50,000 or 60,000 screenplays lying around in a drawer somewhere, but I might have to hustle to write the rest before the Christmas break.

Then there were the meetings with government funding agencies that had me doing a song and tap dance as I tried to explain the contents of a film proposal that had already been overwritten and overexplained in all the documents they demand to see before they even sat down to chat. No word yet if it did any good.

And finally, If you’ve been reading the blog long enough, you may remember I’ve been settling my aunt’s estate since early 2008. Ten inheritors, eleven tax returns, and two and a half years later, I’m done. The estate is finally closed. I’d tell you all the gory details, but at this late stage I can’t muster enough energy to describe my crushing sense of apathy. Or my euphoric relief. All I can say is that at the end of the day, I much prefer writing about dead people than handling their finances. 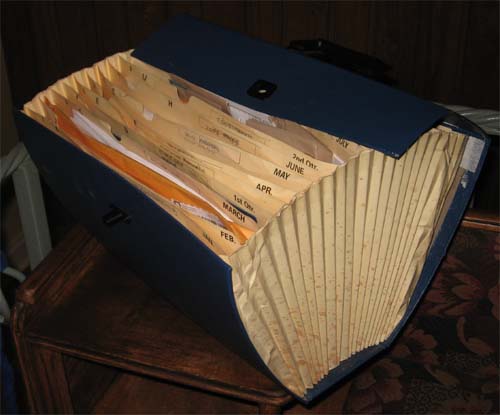 The battered, bruised and badly coffee stained file case I’ve been dragging around on estate business for years. It, and a brimming banker’s box of financial records, are now ready to be retired. The contents are scheduled for an intense date with the cross-cut shredder.