History and Archaeology, Politics and Sociology

It Was A Nice, Polite Country While It Lasted

I don’t know if you’ve heard the news, but Canada is now, officially, a failed state. After losing a first-round men’s hockey game to the U.S.A. in the Winter Olympics, on home soil no less, we’ve decided to dissolve parliament, abandon our laws and constitution, and fight a few civil wars long-in-coming (yeah, I’m looking at you, Nunavut!). Taking a cue from our failed-state brethren in Africa, we’ve decided to resort to open piracy along our coastlines and launch a genocidal ethnic-cleansing campaign against anyone deemed to be a “hoser.” Oh, and word of advice, if you should receive any unsolicited emails from “a Canadian prince” who wants to use your bank account number to transfer large amounts of money out of his troubled nation in exchange for a hefty handler’s fee, move it to your spam folder. It’s a scam. Unless it happens to be from His Royal Highness, Prince Shane the First of the House of Eyestrain. Then it’s totally legit and you should do exactly what he says.

The 2010 Vancouver Winter Olympics persist regardless, however, because we have to do something with all that snow we emergency air-lifted to the venue at great expense. Yes, after years of planning and preparation, construction costs and controversy, training and tragedy, the entire world’s eyes are focused on one sporting event, and one sporting event only. I am, of course, talking about Tiger Woods’ apology speech.

And it was a bit of a dud, wasn’t it? Allow me to offer a rewrite. I know all about rewriting because, as a screenwriter, I’m being rewritten constantly. And it must always be for the better because it ends up on TV, and isn’t TV wonderful? Tiger, here’s what you should have gone with — the non-apology apology. Trust me on this one, I’m a professional.

“Hi, I’m Tiger Woods and I like me some pussy. What can I say, I’m a guy. The issue here seems to be whether or not I should have made a sexual glutton of myself by nailing lots and lots of smoking hot women. I think the answer is obvious. Hell, yeah! I’m incredibly rich, world-famous and dashingly handsome. What the hell’s the point of being rich, famous and handsome if I don’t use those three enviable attributes to help me score? I’m mean, shit, if I didn’t spend every waking hour getting laid, commuting to the next hotel where I’m going to get laid, or chatting up the next girl I’m going to lay, my whole life would just be about golf. Think about that. Golf for fucksake! If I have to play the world’s most boring sport — and I use the term “sport” loosely — in order to make a living, don’t begrudge me the pussy it earns me on the side. I need it to get through the day. If I’m going to apologize for anything, then allow me to say that I’m sorry, truly sorry, that I married a psycho Swedish chick who tried to take my head off with a nine iron when she found out about all those other asses I was tapping. That was inexcusable. I don’t know what I was thinking when I proposed marriage. I must have been drunk or high or something, because why would I get married and forsake all that other pussy out there that was just lining up to get a Tiger in their tank? Crazy, man, crazy.”

It’s not too late. Book another press conference. We’ll all show up. I mean, what the hell else are we going to watch? Elimination curling? 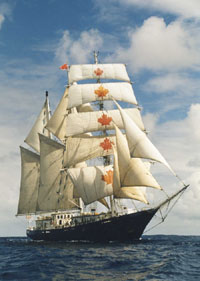 Also in the news, I have to mention the Canadian tall ship, Concordia, which sank 300 miles off the coast of Rio a few days ago. No really. A tall ship. It sank. When was the last time you heard about that sort of thing happening? I’m thinking nineteenth century. It makes you wonder, what the hell happened? Did some peg-legged brigand smoke his corncob pipe too close to the powder magazine when he should have been keeping his one unpatched eye on the cargo of slaves fresh from the Ivory Coast? Arrr matey, they be fetchin’ a fair price after we be stoppin’ by New Providence for a wee spot of rum and doxies, yo-ho! Or maybe it was John Paul Jones who perforated their poop deck when he gave them a broadside of grapeshot, thinking they were a flagship from the Canadas Upper or Lower running his blockade? I’m just saying, it’s a tad nautically retro.

All sixty-four passengers and crew were rescued by the Brazilian navy and merchant vessels. No one rested their bones in Davey Jones’ locker. It was all so ill-timed. Our newly failed state could have really used that tall ship for our fledgling piracy industry. Such a waste.