Criminology and Law, Film and Television

We’re all still reeling from the tragic celebrity deaths of late. Any recent dead Kennedys aside, the last week of June was like Christmas morning for dead-pool organizers everywhere. Of course, out of the pile of famous bodies left in the wake of these recent terrible days, one pillar of pop culture towers above all others. Taken from us suddenly at the age of 50, struck down by a surprise heart ailment brought on by a drug overdose, can we really pick up the pieces after the shattering death of Billy Mays?

What? You were expecting somebody else?

Billy sported the world’s most improbable beard and a booming voice that never stepped down from an all-out scream throughout the running times of his many TV spots. Many, many TV spots. Too many, let’s face it.

Although his commercials still play regularly, his ear-shattering voice louder than ever, struggling to be heard from beyond the grave, we’ll never see Billy Mays shill for a new product. Now that he’s gone, there remains one pitchman unchallenged for airwave dominance. I am, needless to say, referring to “Vince” the Sham-Wow guy. Not his real name.

Proud owner of the greatest terrible Jewish name ever, Offer Shlomi, AKA “Vince,” looks like Steve Buscemi and Johnny Knoxville had a love child. As a pitchman, his first infomercial was made to sell DVD copies of his failed film The Underground Comedy Movie — an attempt at humour so poor, my frequent efforts to download it and see for myself have been fruitless since no one out in bittorrent land wants to reseed it. His attempts to turn a profit on the project by suing everyone who contributed to its failure didn’t do the trick, but direct sales finally managed to move a few copies.

Experiencing more success as a pitchman than a filmmaker, Shlomi went on to great infamy and reasonable success as the front man for the Sham-Wow and the Slap Chop. And then, perhaps inevitably, he got arrested for beating up a prostitute who bit his tongue. It’s the old familiar story. Humble beginnings, rise to power, prostitute tongue-biting scandal. Just like Gandhi, Lincoln and Alexander the Great before him. Same shit, different era.

When I read his biographical details I knew, at last, what I wanted my next film project to be. How could I not write this biopic that demands to be made? As biopics go, I’m picturing it as the Lawrence of Arabia of the 21st century. Only without all the sand or camels or Arabs or class or dignity or broad audience appeal or…well, you get my drift. It’s a niche project. Limited release. Straight to DVD, much like The Underground Comedy Movie. So far, I’ve only written the title:

Shlomi the Money: An Offer You Can’t Refuse

Eight words in, I’m practically done. The rest writes itself. It’s a slow burn up to the moment when “Vince,” still coasting on the success of the Sham-Wow, resting uncomfortably on his considerable laurels, lacking the creative direction to find his next masterpiece, consoles himself with the comforts of a woman. For a modest negotiable price to be paid up front.

This at last brings us to the climax of the picture — the moment of divine inspiration after he extracts himself from a particularly bitey prostitute. Slapping her in the face, he declares, “Crazy bitch! Whatcha tryin’ to do, chop my tongue off?” And then that look would cross his face. The look of a man who has been touched by the angels. The look of a man who, in a terrible moment of personal crisis, has rediscovered his muse.

And then our hero is back on top. After the trip to the hospital, some stitches, battery charges, and sentencing of course. Everybody leaves the theatre happy — or at least ejects their rental DVD from the player not feeling totally ripped off.

Another masterpiece in the can. Pay me. 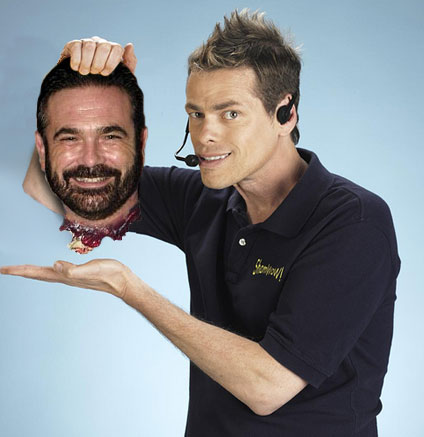 Billy Mays and Offer Shlomi. There can be only one.
(No I didn’t have to Photoshop this myself — that’s what the internet is for)

One thought on “Pitching Not Catching”