The Trouble With Hairy

There was a recent eviction in my neighbourhood. I only found out about it after the fact, when our neighbours rang the doorbell and told me, “Um, there’s been some drama.” More people were gathered outside, gawking and gossiping amongst themselves. Apparently my house was the centre of attention for some reason that escaped me.

It turns out, a few houses down, one of my other neighbours had discovered a whole nest of raccoons on his roof — a big mama raccoon and half a dozen babies. He put the babies in a box and moved them outside, and then sawed off the tree branch that was allowing the mother access to his roof. When she returned from a round of foraging, she was dismayed to find there was no way home and her babies missing. It took an hour or so, but she located the box of offspring and the collection of humans cooing over how cute her litter was. After chasing the bipeds away, mama raccoon immediately set to moving the whole brood, two at a time, to her emergency backup nesting spot she had obviously scouted out much earlier.

That just happened to be under my front porch.

I knew there was a space between all that slate and concrete and the ground beneath, but I never imagined it could accommodate an adult raccoon and a pile of babies. I still wouldn’t have believed it, except my neighbour had photographic evidence of the whole raccoon relocation. It’s now a popular video on YouTube.

I’m content to let madame raccoon raise her family under my porch. The babies will likely outgrow the new nest by mid-July and they’ll all move on after that. Unfortunately, it seems their mother isn’t quite so happy with the new digs and is already scouting for an upgrade. As I write these words, I have a peeping tom up in a tree in the backyard looking through my office window, hoping to find a way to sneak onto my roof and claim squatter’s rights. Well, the tree is little more than a sapling so it’s unlikely she’ll ever find a path to…

Bugger. She’s figured it out. Our adjoining neighbour has a fence, and a tree, and a balcony, and a ladder. It’s a complex puzzle to work out, but a raccoon’s ability to problem-solve is quite something to witness. Give them another three millions years of evolution and raccoons will be running the planet. They’ll be the dominant life form and our descendants will be trying to figure out how to get the raccoons’ garbage cans open in the middle of the night so they can feast. 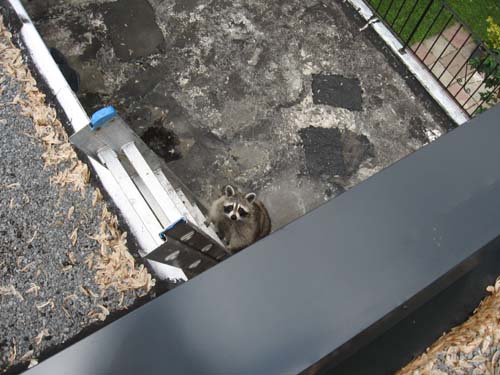 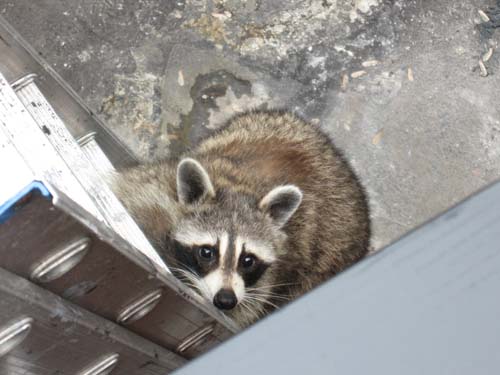 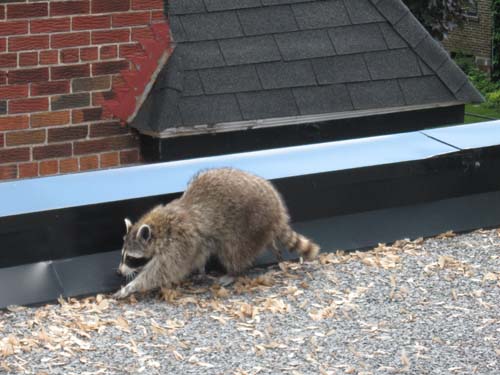 After snapping these pictures of our fearless mother raccoon, I went back up on the roof to make sure she’d left the building. Although she’d yanked off all the drain covers from both our roof and our neighbour’s, it appears she didn’t find any viable nesting spots. Time will tell. I’ll update you in the future, assuming she doesn’t decide she’d prefer to raise her family inside our house and sends us and our cats packing.

3 thoughts on “The Trouble With Hairy”