Comics and Graphic Novels, Death and Morbidity, Film and Television 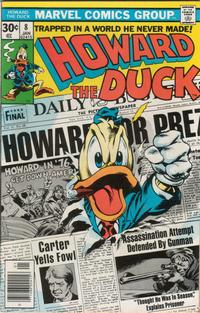 If you know your comics, you’ll know who Steve Gerber was. And you’ll also know that he died last month. Back when mainstream comics were dominated by superheroes (which, unfortunately, they kinda still are) he was writing satire for Marvel. Yes, satire. For Marvel. I’m not exactly sure how he managed that, but one of the most interesting comic books to come out of the 1970s was Howard the Duck. Although this title was sadly tarnished forever by the George Lucas crapfest movie that came out in the 1980s, those who remember the original comic book remember it fondly as a skewed look at America (and American comics) with a whole bunch of bad attitude. Steve worked on many other comic series, but he’ll be forever remembered as the man behind the duck.

Another comic industry figure you may also be aware of is Rich Johnston, one of the top comic book columnists out there. He writes Lying in the Gutters, and I once had the pleasure of sitting through the Eisner Awards in San Diego with him back in the mid-1990s. Referring to Steve Gerber’s death in one of his columns, he continued with the thought:

“But one thing stuck out about Steve not being appreciated by the industry during his lifetime. Which sent me thinking. Who else are we ignoring right now, who has been rewriting the rules and setting the scene for many?”

Among the select list of notable names and projects he rattled off, there was this paragraph.

“Shane Simmons. Author of the two ‘Longshot Comics’ and the lesser ‘Money Talks’ series and one of the most inventive, creative and consistent creators. Imagine Chris Ware crossed with Groucho Marx. He writes television now. We lost this one, folks.”

I’ve been writing television for about twelve years now. And when I started to get enough screenwriting work to earn a living and keep me financially afloat, I quickly began to drift from the comic book scene. It’s been years since I’ve published anything new outside of my contributions to Rick Gagnon’s What the F***? comic jam compilations. Even my attendance at those events has become spotty. Not through disinterest, mind you, but thanks to frequent scheduling conflicts.

I was able to get to one of the jams just a couple of weeks back, however. Since the days of the massive Gallery Stornaway events that drew comics artists from all over the province, outside Quebec, and even outside Canada, the local Montreal jams have become smaller and more nomadic, drawing no more than a dozen artists at a time and often far fewer. This latest one was held in a dead little dive of a bar, selected not for its inspiring ambiance, but for its bright lighting and lack of loud music. There we sat, a mix of Francophone and Anglophone comic artists, and worked on the next batch of pages that would grace a future issue of What the F***? — now due for its eighth small-press volume. Among the attendees was Jack Ruttan, a frequent contributor to the scene. He snapped some photos and drew some portraits and wrote a blog about the event on his web page.

I started the evening with a single large panel I had dreamed up earlier in the day. I had the layout in my head, as well as all the words and balloon breakdown for the dialogue. I decided to spend an hour or so penciling and inking the entire thing, completing my first whole panel, start to finish, in far too long. It was labour intensive and felt like a long time to create something that people would read in the space of about five seconds. Yet I felt strangely satisfied in way I haven’t felt…well…also in far too long a time.

This isn’t the first sketch a comic artist has done of me during one of our gatherings, but it’s probably my favourite. Mostly because it’s in colour, I look sinister, and have hands that could crush men’s heads. Illustration by Jack Ruttan.

The reality is rather less fearsome. Photo by Jack Ruttan.

Recently, copies of the new Italian edition of Longshot Comics: The Long and Unlearned Life of Roland Gethers arrived on my doorstep. It’s been out since November, but I only got them now after the first batch went missing in the mail and the second batch was stopped, opened and inspected by Canada Customs before being allowed on its way. It’s a routine I grew used to early on in my self-publishing career when I was receiving packages of comics and videos from all over the world. Our dutiful authorities must open everything coming into the country just in case in contains child pornography. Good work guys! Glad to see you’re still trying to catch the one remaining pedophile who doesn’t have internet access yet. Keep at it, you’ll nail him one day.

As I’ve been informed by the publishers, the new translation is selling briskly in Italy. Reorders are building up and a lot of copies moved at the Lucca Convention. It’s also been nominated for a “Best Independent USA Comic” Comicus Prize. Shhh. Don’t tell them it’s actually a Canadian comic.

I’ve been exceptionally pleased with the care taken on the design and translation of the book. There’s even an index of notes to further illuminate some of the historical references and terms sprinkled throughout. It feels weird, after all these years of screenwriting and the associated ham-fisted butchery that goes along with it, to have my words so carefully handled and respected by others. And it also feels weird that such respect has become so alien in my career. It didn’t used to be like that.

The newest incarnation of Longshot Comics has arrived. The covers, although different from any previous edition, show a loving attention to detail in their successful recreation of my intentions, both artistic and comedic.

Longshot Comics, remains, I think, the most artistically successful, well known, and widely renowned project I’ve ever worked on. And there’s one simple reason for that. There’s not a word or a letter or a dot or a line I didn’t put in there myself. Editorial input was zero. I sent the artwork to the publisher, they sent it to the printer, they sent it to the distributor and they sent it to the comic shops. It was a pretty long route to get it into the hands of the consumers, but the end result was a direct unfiltered line between my brain and the readers’.

I don’t much care for the prospect of spending my days second guessing the decisions I made years ago. A successful screenwriting career is nothing to turn my nose up at, but I can’t help but wonder, almost on a daily basis, if I’m on the right track here. I think I am generally, but not all the wheels feel correctly aligned with the rails. Something’s grinding and kicking up a lot of sparks.

Maybe it’s this early-onset mid-life crisis I’ve had going on perpetually since the day I turned 30, but I’ve been wondering a lot lately. How lost have I become?