Death and Morbidity, Politics and Sociology

If only I could claim it was work that was keeping me so busy. But I’m afraid not. These days, most of my time is consumed by lawsuits and court actions, throwing my hat into the ring as one of the possible biological fathers of the late Anna Nicole Smith’s baby. I keep offering DNA samples to anyone who will listen. So far, no takers.

My darling vaguely-conceivable fruit of my loins –- Baby Gravy Train as I affectionately call her –- is caught in the middle of an ethically dicey custody battle between several dozen men who may have popped a bun in Anna’s ample oven around the time her daughter started dividing cells and dreaming of one day becoming a complex multi-cellular organism and heiress. Now these desperate heartbroken men, who all meant so much to Anna for so short a time, are lined up around the block (and the next block, and maybe the block after that as well) to be the one who gets to lavish love and affection and fatherly advice on Baby Gravy Train. Love of her inheritance, affection for her trustee bank account, and fatherly advice on how many luxury yachts the money should be invested in before legal adulthood inconveniently separates child from father-slash-accountant in a mere eighteen or so years.

I don’t know about the others, but I for one am fully prepared to accept the enormous responsibility of managing the tens of millions of dollars worth of inheritance money and assets recently decided upon by the Supreme Court of the United States of America. And the raising a baby part, too. Something to do with changing diapers once in a while I understand.

I’m convinced my claim is rock solid. Anna and I met at a methamphetamine-pie-eating contest in Albuquerque. I passed out early after opting to eat too many of the pie crusts. How was I to know the majority of the crushed tablets were baked into the crust rather than the filling? Last a remember, Anna was well on her way to winning the blue ribbon, determined to eat that as well. I woke up three days later in the Bahamas with no passport, a sore ass, and a raging case of crab lice. I can therefore only logically assume that I’m in the running for official recognition as one of the army of potential sperm donors. They say romance is dead, but not I. Not I, dear reader.

But the battle to prove my parentage is a difficult uphill slog. Meanwhile, I have all these DNA samples lying around going stale. And I just keep producing more and more of them. It’s like they grow on me or something. If you would like one of my DNA samples, they can be ordered through my online store. Sales are prohibited where customs laws restrict entry of unregistered biological or chemical agents. Act now. Supplies are unlimited. 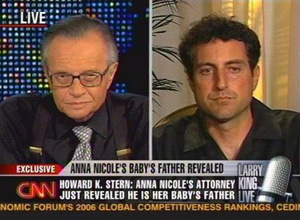 Damn you, Larry-King bookers! Where’s the love? I’m in line, too!

Anna, sweet, Anna. How could I resist that face? I’m not made of stone.