Books and Prose, Death and Morbidity, Dining and Cuisine, Film and Television, History and Archaeology, Theology and Religion, Travel and Exploration

I wasn’t hung over.

That was something that had concerned me slightly when I’d woken up in the middle of the night with a minor bout of nausea after all that wine. But wide awake again in the morning, I felt perfectly fine for the last day of work.

The final battles for the shape of the show to come were waged throughout the morning and afternoon as we finished banging out what, more or less, would happen over the course of the first four hours of the series. Remarkably it all came together amidst the countless scribbles and notations that covered the large white erasable board at the head of the room (both the front and the reversible side). Once the producers fled the room, it was simply a matter of the writers transcribing all the notes so we could each compile them into some semblance of an outline once we got home.

The day was done early enough for me to take one final stab at tourism. It was my last chance to see the town, my last chance to hike out to an historic landmark. But which one to choose? Well, you can never see too many medieval cathedrals I always say. No, really. Ask my friends. I’m always saying that.

St. Patrick’s Cathedral it was. This one was built after Christchurch so, needless to say, all the stops were pulled out to top the earlier House-o-God. It was bigger, fancier, more Gothic, and with more local dead celebrities of bygone centuries filed into the walls and floors. Among the better known bags of bones interred there is Jonathan Swift, author of Gulliver’s Travels and, slightly less famously, A Modest Proposal, perhaps the greatest work of cannibalism advocacy in the history of literature. Under a slightly smaller floor tile next to him is his long-time significant other, Stella Johnson, who there’s no proof Mr. Swift ever legally married. I guess living in sin isn’t so much of a problem for the church if you’re both conveniently dead, thus their roped-off place of honour on hallowed ground.

Taking pictures inside these holy relics is a dodgy affair and the rules vary. You know how tourists are. They love to snap away. In Christchurch they apparently let you go whole hog. Flashes go off steadily and no one says boo about excessively documenting the place with rolls of film that will bore both family and friends once you get back from vacation. St. Patrick’s, however, is rather snootier about voguing for the camera. If you want a souvenir, then you should bloody well cough up for a St. Patrick medallion like a good little Christian. They aren’t a cheap snapshot sort of cathedral, not like that harlot Christchurch up the street! Oh no. Here you must pay proper respect. And they have enforcer priests patrolling the grounds to fuck you up if you get out of line.

“My son,” he said in that fatherly, understanding, ball-busting tone only men of the cloth have been able to master, “this section is now closed to the public.”

I have to admit, I’m not really wild about guys who are probably younger than me calling me “my son.” It’s creepy. It also makes me feel like a little boy who’s about to be inappropriately touched in his bathing suit area. Sorry, priest dudes, but you seriously need a PR makeover.

Still, as I found myself ushered out of yet another section of the cathedral that was suddenly declared off-limits, I couldn’t help but feel that familiar pang of atheist regret. With the choir’s majestic singing, the towering columns raised to the glory of God, the magnificent stained glass with such fine detail…  Even the four-storey tall monument in which the praying hands off all the figures within reach had been torn off as collectible religious artifacts by devout vandals in centuries past… It put into focus the seductive nature of religion, and again I felt like an outsider looking in at a warm, safe enclave where I could be reassured and loved if only I stopped being such a foolish cynic and let myself believe…

This just fifteen minutes after I paid four Euros to get into the place. And with my very soul lying in the balance, I was also reminded of the shameless gouging of the people by religious institutions. Oh sure, you guys were happy to take my money, but where was the tip-off that you were just going to boot my ass out of the place again in a few minutes, huh?

“You’ll have to leave. Unless you’re staying for the service.”

Oh, so that’s it! Give the heathens a taste, welcome them into God’s house, then hit them with the catch. Sure, we can have a quick peek, but if we want a good look around we’d better roll over and let you save our souls. No dice, you fucking drug dealer. Opium of the masses, indeed. Gimme a refund or I’ll roast in hell just to spite you.

No refund, no saved soul. I was out on the street again with only another social engagement of drinking to keep me warm.

Apparently, whenever Bono isn’t jetting around the world telling other people how to run their countries, he’s the proprietor of a hotel in Dublin. I’m sure he owns plenty of other properties too, but I didn’t visit any of them. I really didn’t give much of a shit to see his hotel either, but that’s where our gang ended up. In the bar, naturally. As a celebrity-owned establishment, it draws other celebrities like moths to a much brighter moth. While we were there, one of our group actually spotted some guy I’m not familiar with from a TV show I don’t watch. I was star-struck – or at least I would have been had I actually seen the guy. He was gone before I could look, likely ejected from the grounds because, as we well know, all celebrities are dangerous troublemakers, often armed, sometimes homicidal. Especially TV celebrities. Best to preemptively call the bouncers.

Our last gourmet meal was another showstopper. A showstopper with plenty of potatoes. I generally don’t like to reinforce a bunch of negative stereotypes. For example, I’ve tried not to give the impression in these last few entries that the Irish are fond of drink. I’ve failed miserably in this because they ARE, in fact, fond of drink, and I’ve repeatedly mentioned it. But (and this is the important distinction) I’ve TRIED not to. Well, again, I’m trying not to give the impression that the Irish eat a lot of potatoes. It’s a silly cliché and I’ve hardly had anything to say about potatoes this whole time (unless you count the potato famine and chips). But I would be terribly remiss in my impartial reporting of the facts if I didn’t note that in a number of Irish restaurants, in addition to your appetizers and main dishes, they’re also in the habit of bringing a big bowl of unsolicited potatoes to the table. I dismissed it the first time it happened, but it kept happening. It’s like the country is so overwhelmed with potatoes, they have to force them on you.

“Look, we know you didn’t order this, but could you please eat some. We forgot to plant anything else this year and now we stuck with several million tons of the bastards.”

What the hell did they grow there for thousands of years before someone brought a boatload of spuds back from overseas?

The evening ended in the V.I.P. lounge of what, I gather, is one of Dublin’s more exclusive clubs. I don’t recall ever getting into a V.I.P. lounge of a club before, largely because I’ve rarely bothered to cross the threshold of many clubs in the past. Apparently, the key is the be in the company of someone who has spent huge wads of cash there. I guess you could earn your own way into the lounge with repeat visits and plenty of greased palms, but that seems terribly time-consuming and expensive to me. Especially since, under normal circumstances, it’s unlikely I’d ever been deemed cool enough to make it past the doorman and into the general dance area to begin with.

The funny thing about a V.I.P. lounge is that if it weren’t a V.I.P. lounge, it’s a part of the club you’d never want to hang out in. Comparatively, it’s dead. All the drinking, dancing and hot chicks drinking and dancing happens in the other rooms. The lounge, however, is where you go to have a relaxing evening with friends, away from all the noise and bother of the rest of the place. You might as well stay home and read a good book. The fact that this particular V.I.P. lounge was filled with shelves of books is telling. I expect the usual chain of events goes something like this:

“Boy, I wish I could get into that trendy club.”

“All right! They’re letting me into the V.I.P. lounge!”

Finally acclimatized to the time zone after four days in town, I felt ready, able and willing to stay up all night drinking and having fun. So we promptly went to bed early. Our plane ride back home was around noon the next day and we wanted to get plenty of rest before facing the gauntlet of security checks, customs agents, and flight delays.

Being the only one to have hiked all over town, I was the designated navigator who safely steered the remaining members of the Canadian delegation back to the hotel. 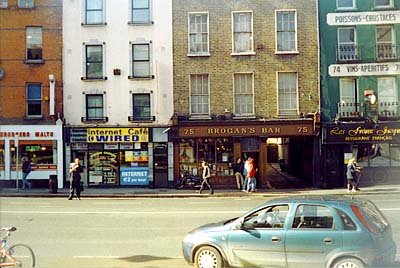 The face of modern Dublin. Internet café next to the pub. Drunken surfing ensues.

You can take pictures of the stained glass in Christchurch because they’re a bunch of whores.

Not so in St. Patrick’s, but I took one anyway. Four Euros to get in and they didn’t tell me they were just about to close? Well no one expressly told me not to take pictures either, so I guess we’re even. Pious dickheads.