Just when you thought the mainstream news media couldn’t get any more lame, Fox News ups the ante with something that might even trump CNN’s abortive use of hologram reporting. Seriously, hologram reporting. They did that shit once. They beamed the image of their reporters into the studio so it looked like they were actually standing there, next to other reporters who were just standing there for real. This technological leap forward accomplished what journalists scarcely dared dream of for decades – filing a remote report in front of a hologram camera instead of a video camera. Pure genius. Sadly, the experiment failed when every hologram-projection filed proved to be a plea to somebody named Obi-Wan, who was, the reporters assured us, their only hope.

Not to be outdone, Fox News has now given us a studio full of prop-people diligently slaving away at prop-touchscreens. But they aren’t just any touchscreen tablets. No, they’re GIGANTIC touchscreen tablets. Looking akin to King Kong’s iPhone, they fill the set with superfluous techno-bling by the dozen. And the sight is indeed impressive – impressively stupid, instantly dated, and dumb in ways I can’t explain. So I won’t. I’ll let Fox News stooge Shepard Smith explain it himself.

Shepard – Shep to his friends, but he has no friends, so everyone calls him Shemp behind his back – makes a valiant effort to justify the unjustifiable. Apparently Fox hasn’t realized that making their reporting bigger doesn’t make their bullshit any more true than when they tried making it louder.

But what really grabs me about this new set is how much it looks like the modern equivalent of a set from the old Adam West Batman show. Giant props will do that. All they need to do now is shoot it at a slightly askew angle and Shep will instantly be promoted to the level of Batman villain, joining the ranks of The Joker, The Riddler and The Penguin. We just need to give him a better villain name. How about The Stupifier? His nefarious plan is to broadcast disinformation to the world at large, making anyone who watches dumber by the moment. Batman will obviously have to produce some sort of filtering lens from his utility belt in order to combat this devious plot or risk having his reading level lowered to that of a chimpanzee in the “special” third-grader class for slow learners. You know, like regular Fox News viewers.

And speaking of The Dark Knight of Gotham City…

There are no Adam West-era giant props in the new Batman video game, Arkham Origins, but there are villains galore. The premise of this free-range sandbox game is that it’s two years into the bat’s crusade against crime when suddenly, one Christmas Eve, a host of new villains start to come out of the woodwork to replace all those standard-issue mobsters he’s already thwarted.

According to the continuity of this prequel to the two previous Arkham games, we’re to believe that all in one night, Batman has his very first encounter with headliners like Killer Croc, The Penguin, The Riddler, The Mad Hatter, The Joker and at least a dozen other lesser, but still well-established members of his personal rogue’s gallery. Yeah yeah, it’s a video game, but c’mon…plausibility? Just a smidge? I’m sixteen hours into the game and I’m having a hard time suspending my disbelief that this is all supposed to be happening in one night. I know as a kid Christmas Eve seemed to go on forever and Christmas morning was painfully slow in coming, but even last-minute shoppers aren’t this rushed and busy on the 24th.

This game also marks the retirement of the definitive Joker. No, not Heath Ledger or Jack Nicholson or Cesar Romero. I’m talking Mark “Luke Skywalker” Hamill who has been voicing the character for various video game and animation projects for decades. Apparently he took the job to carry him through to his next Star Wars gig. Now that that’s finally in the offing, he’s stepped down as the Clown Prince of Crime and passed the job on to Troy Baker, who doesn’t attempt to reinvent the wheel. Following Hamill’s cue, he’s doing effectively the same voice rather than something entirely new – like Ledger’s weird gravelly Boston-tinged Joker. Given that Hamill so defined what the Joker is supposed to sound like over the past twenty-one years, it’s probably a good decision, if only for continuity purposes.

In other video game news, I’m compelled to mention my Halloween gift came early this year with the October 31 release of the “Blood & Gore” DLC for Total War: Rome II. Total War has long-since become my favourite video game franchise, and I’ve enjoyed every single incarnation of it since the release of Shogun in 2000. It was only with the arrival of Shogun 2 in 2011 that any attention was paid to depicting the bloody mess that was medieval and ancient warfare. Sure, modern warfare is also a bloody mess, but the Total War series has always spared us any forays into that boring mechanized button-pushing morass. Other game series have it well covered. Total War sticks to the swords and arrows and halberds, and long may it continue to do so. 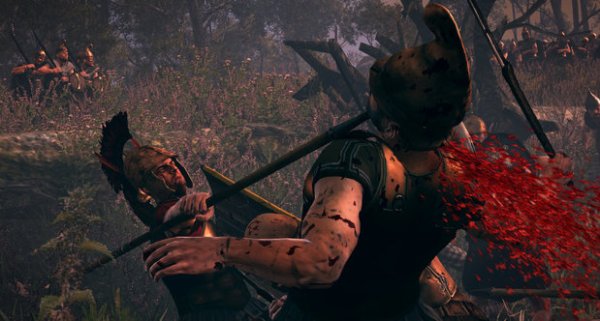 Let us not pretend that getting a pilum in the face circa 100 BCE was a tidy affair.

Oddly, in a series so devoted to realistic ancient battle and tactics, it wasn’t until the Blood Pack DLC of Shogun 2 that they dared show us all the rolling heads and spurting arteries one might expect from hand-to-hand combat. Despite my notorious penchant for gory movies, I’m not as bloodthirsty as some might think. The pleasure I derive from seeing this much blood splashed across my monitor as virtual armies clash isn’t due to sadism, it comes from a desire for more realistic displays of violence in media. War isn’t a clean business. And perhaps if more people got a look at the blood and suffering it entails, particularly in our sanitized news media, there’d be a lot less of it.

Just don’t show it to us on those stupid giant tablets or I might get the giggles.